There are two ways to get to Kai Bae waterfall, which isn’t marked on any maps of the island or listed in any of the print guides.  The simple way just involves walking 30 minutes inland from the 7-eleven opposite the turning for Kai Bae Hut Resort.  The more interesting way involves walking over a hill & following a riverbed through the jungle to the top of the waterfall and then clambering down near the side of the waterfall.

I put together quite a lengthy post on this almost 3 years ago after I spent some time trying to figure out how to do it, as this isn’t a route and trekking guides do.  But thought it was time to update it.  Original post is here.   ( And if you just want to get to the waterfall the easy way, then you’ll find info here. )

First thing to do is warm up by walking along Kai Bae beach, I parked at the 7-eleven opposite the access road for Kai Bae Hut.  Stroll along the beach to Porn’s bungalows and then take their access road up to the concrete road near the entrance to Seaview resort.  From here it’s a steep uphill walk to the main road.  Once on the main road you can do a quick detour to the viewpoint, if you don’t already have some water, buy it here. 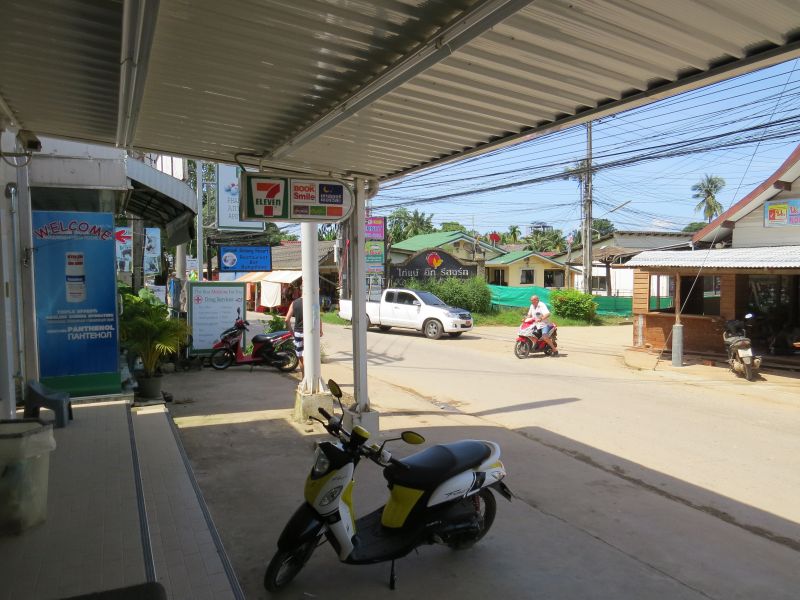 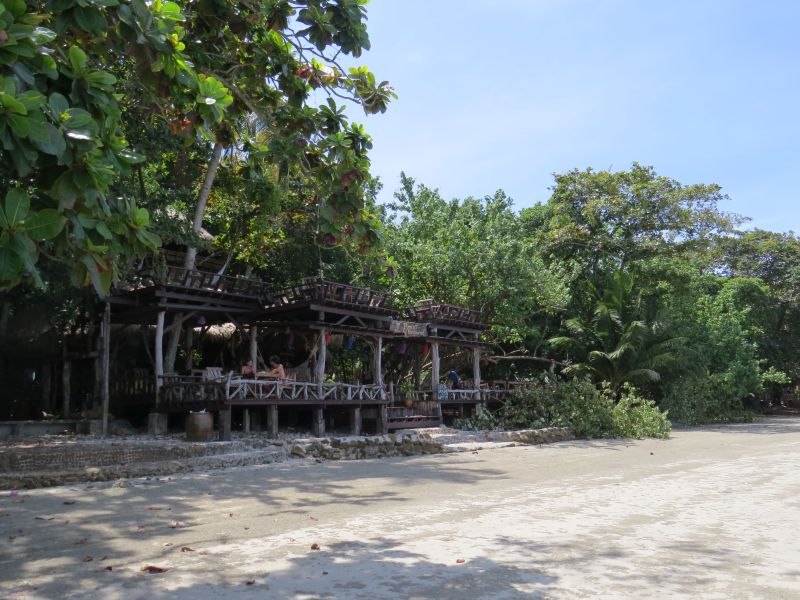 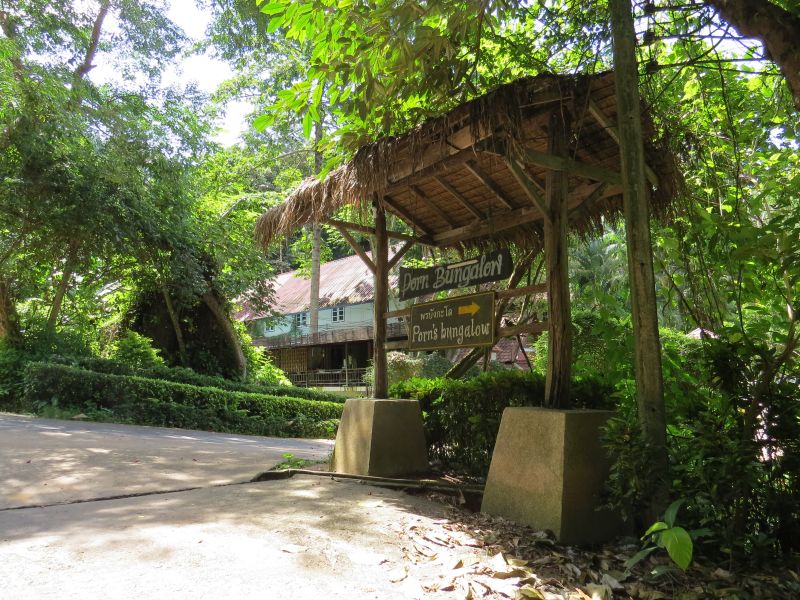 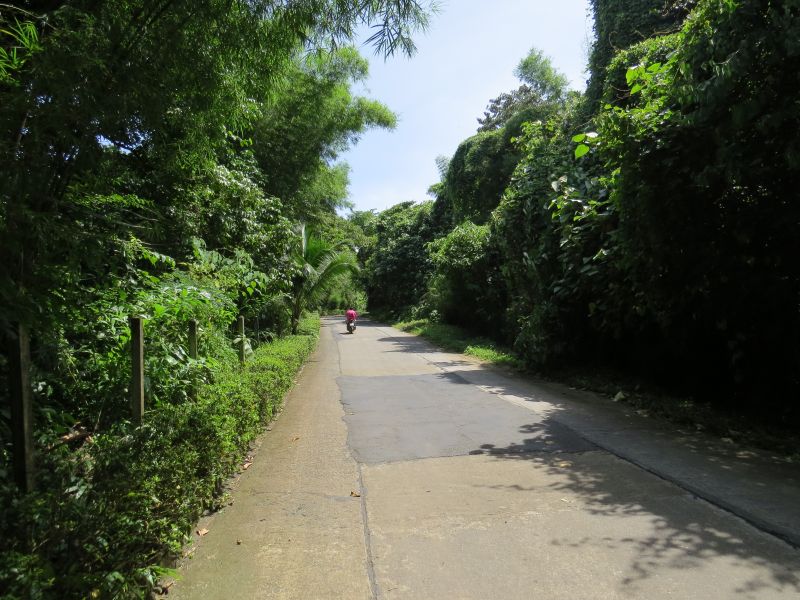 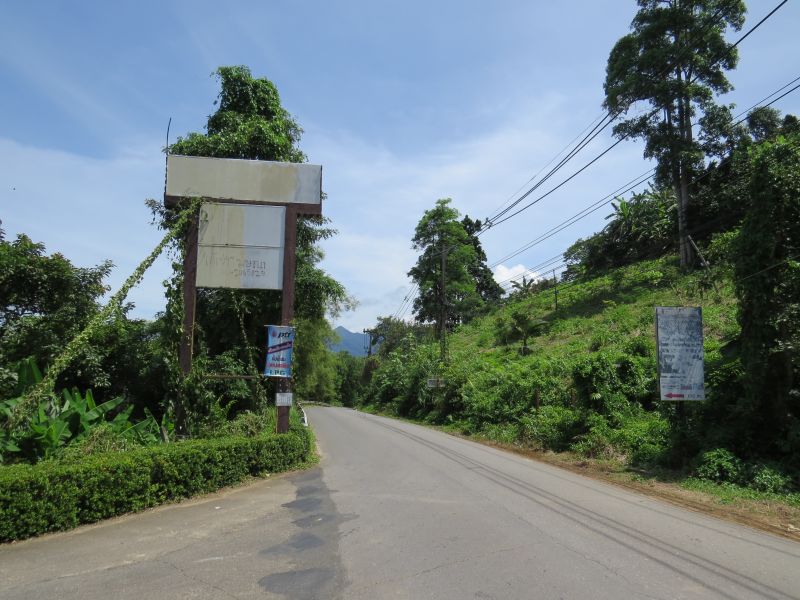 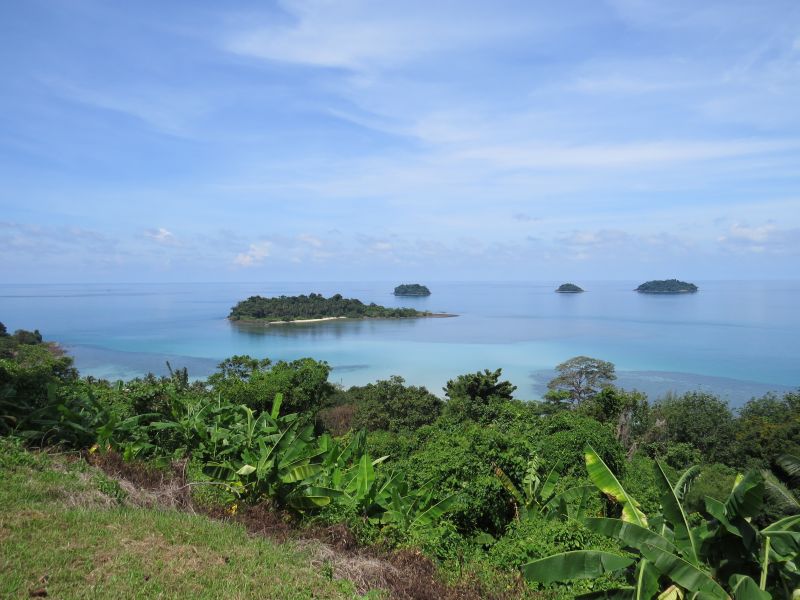 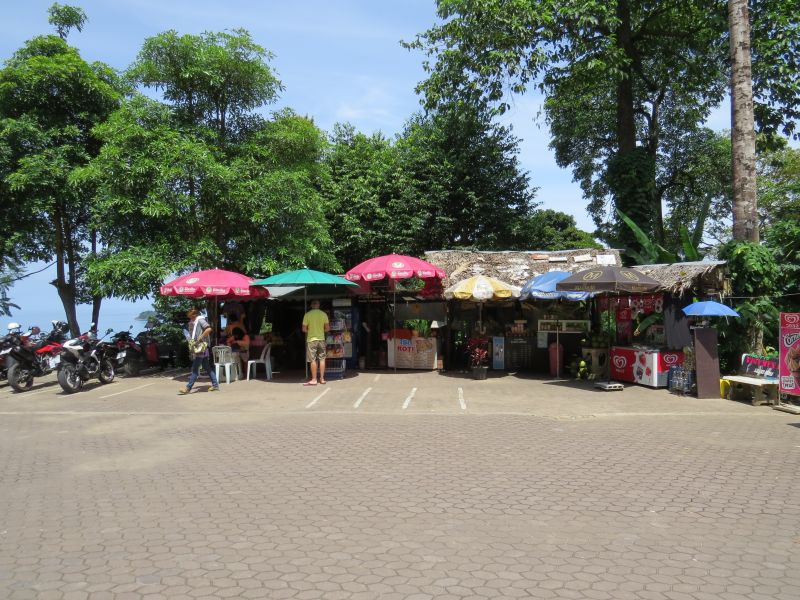 Then you’re going to follow the track up the grassy hill planted with fruit trees, directly opposite the turning for Sea View Resort.  After a couple of hundred metres you enter the jungle, still on a wide track.  Stay on this track as it narrows and after a few minutes walking it levels out and then drops down into a banana field.  You’ll see irrigation pipes and a ramshackle wooden shelter on the right.

Keep walking downhill following the worn path on the right hand side of the field and you soon come to a small stream.  Turn left and walk along the riverbed.  The first part is the hardest as it is blocked by fallen trees, so a bit of climbing over and under tree trunks is required. Follow this small stream for a few minutes until it meets another.  Then turn left, again walking along the riverbed.  You are now only a few minutes walk from the top of Kai Bae waterfall.  You’ll see blue waterpipes running along the left side of the river and then down the side of the waterfall. 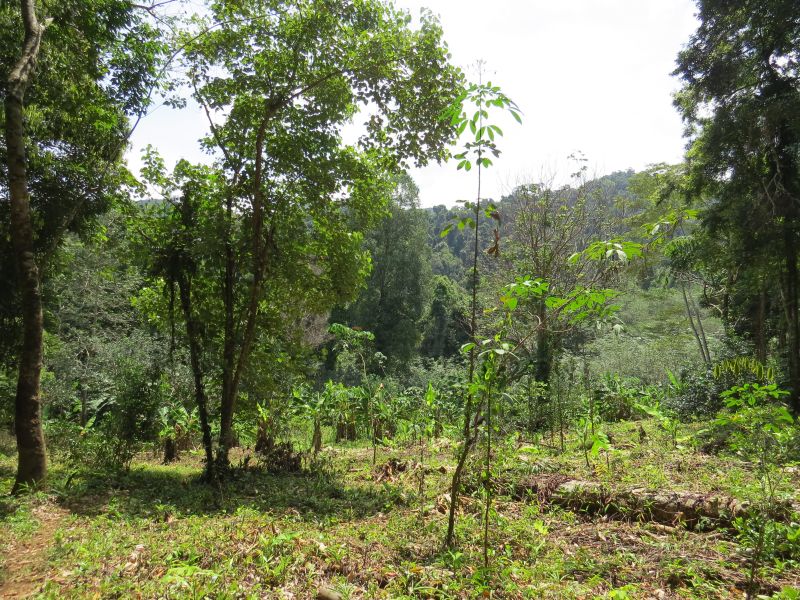 Now comes the tricky bit, getting down 30 metres or so to the plunge pool.  Use vines and roots to help lower yourself down a couple of steeper sections, you’ll need both hands free for this. Don’t pull on the waterpipes, they aren’t going to hold your weight and aren’t securely fixed.  A bit of sliding on your backside might also be required.

The final section is the hardest, for this you’re going to edge down a slope at the top of a 3 metre drop, swing yourself over a small tree that has a knotted rope tied to it and then use the rope to lower yourself to the rocks below.  Getting down the slope to the tree was the hardest part for me, as there are no good foot or hand holds and if you slip then you’ll end up hitting rocks below.  The tree doesn’t look too strong but it is.   I sat on the tree and then leant backwards to grab the rope and slowly lowered my legs down, if you do this there’s a good foothold for your left foot a metre below.  Lower yourself the rest of the way – I wouldn’t jump as the rocks can be slippery.  No way of knowing if they are until you land on them.

Now time for a swim and then you follow the river bed and will soon see a worn footpath on the left, running alongside the blue waterpipes.  Follow this path for about 10 minutes and you come out of the jungle.  You’ll see a couple of modern concrete bungalows on the left and then , 50 metres further some new bungalows facing the river on your right.  follow the wide dirt track all the way to the main road.  Another 15 mins walk.  On the way look out for the pig farm on the right, the tall water tower on the left and then when you get near the main road the elephant camp on your left.

The 7-eleven is 20 metres away on the right.  You’re now back where you started about 2 hours ago. 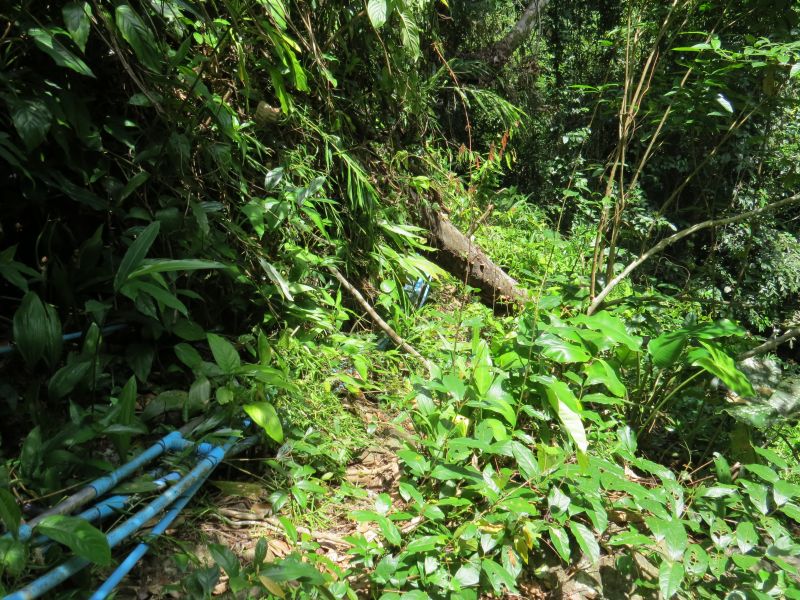 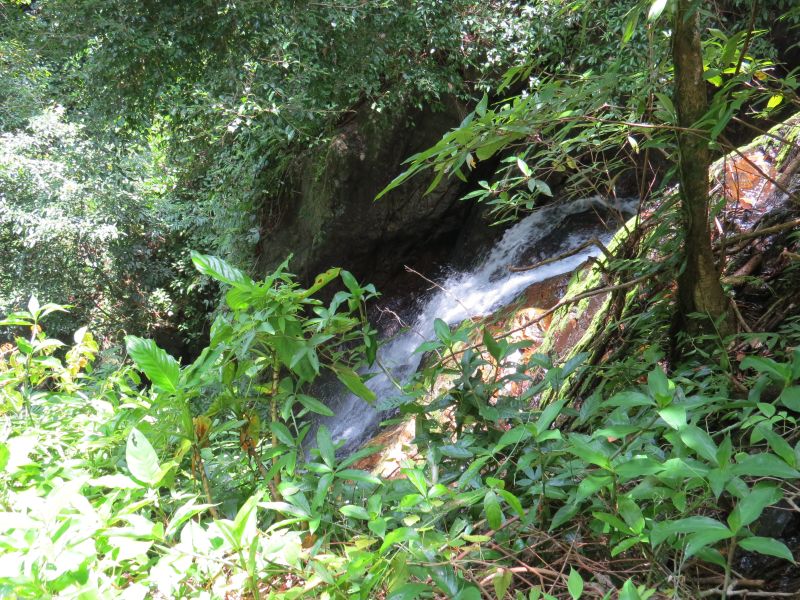 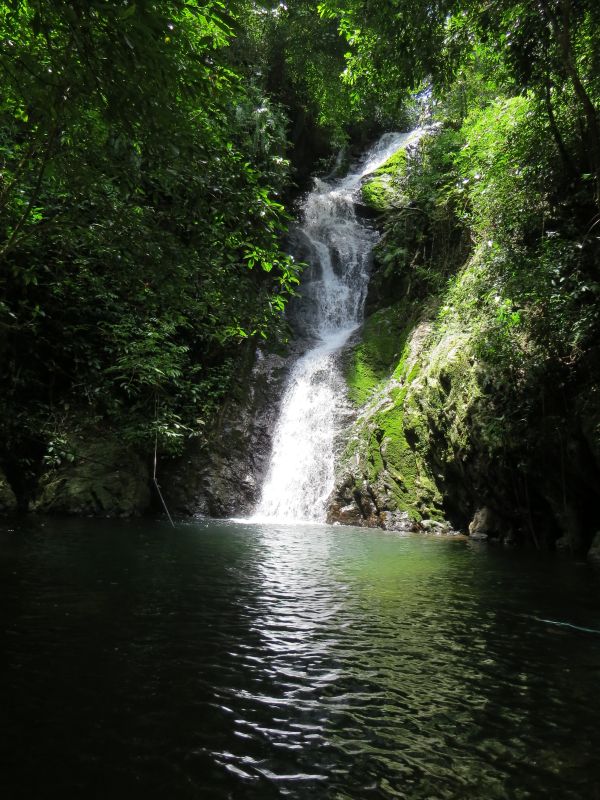 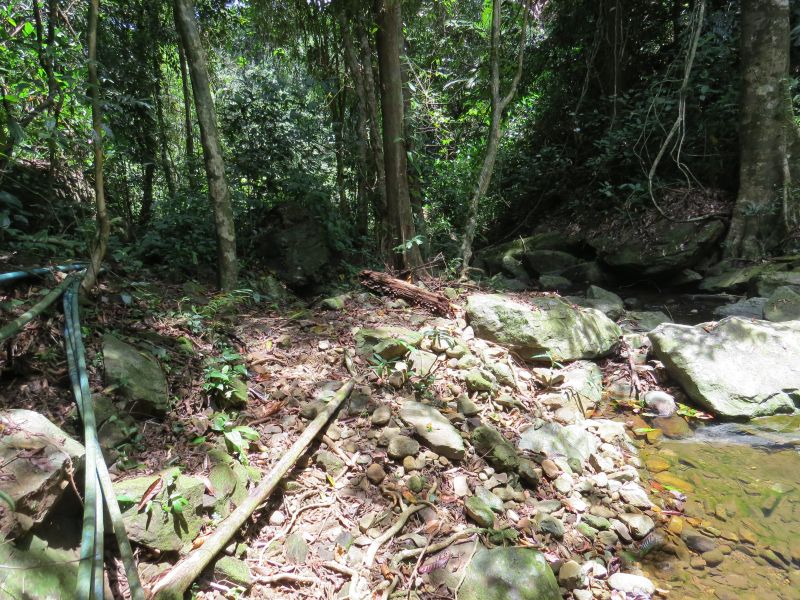 Things to bear in mind :-

A waterproof bag would be useful to keep camera / phone in.

You’re going to be getting your feet wet – so I suggest good walking sandals rather than shoes or trainers.

There are bugs & you’re going to be walking into lots of spiders’ webs.  I doubt any will kill you – but some spiders are quite big, so keep an eye out for them.

There are leeches – they don’t hurt. But it will take a while for the blood to stop once it drops off or you pull it off.  Rub some tobacco, from a cigarette, on the wound and this will stop the blood quickly.

You may well hear monkeys and see them way up in the tops of trees.   They were following me part of the way but it was impossible to get a photo through the branches and leaves.

The most dangerous snakes usually live by water and like quiet areas.  So there will probably be some around here.  I didn’t see any and none of the people who I have heard from who have done this walk have seen any either.  But if you’re worried, best thing to do is make vibrations when you are walking by the river.  Guides often use a stick to tap the ground or rocks.  Snakes will feel this and won’t be surprised by your presence. 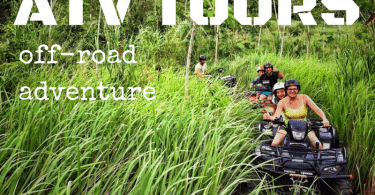 See the jungle by ATV on Koh Chang There are two places on Koh Chang where you can rent and ride ATVs.  However, these are on guided tours along marked trails.  You can’t rent an ATV...read more...

Jungle Trekking on Koh Chang Surprisingly, few people bother making the effort to head into Koh Chang’s interior on a trek. But if you need some exercise whilst on holiday jungle trekking is...read more...