You’ll find cheaper accommodation at this end of the beach. And all manner of shops, bars and Western restaurants.

Guide to the Southern half of White Sand Beach

✔ Busy stretch of beach, but isn’t as attractive as the northern section

January 2022 – I haven’t done a further update and many small shops, restaurants and resorts won’t survive the financial impact of the covid pandemic.  When the situation is back to normal and it is easy to travel again, I will do a full update.

The southern section of white sand peters out into stones and bits of dead coral just south of Kacha Resort. Worth bearing on mind if you decide to book a room at Grand View Resort or beautiful pool villa at Changburi Resort.

Great rooms to be sure, but the steps down from to the beach lead less than invitingly onto this area of rough, stony beach. If you stay here you’ll be sunbathing by the pool rather than on the sand and swimming in the pool, not the sea. But it is ideal for anyone with loads of disposable income and an adversity to mingling with people with a lower net worth than themselves.

South from Grand View Resort, the road steadily climbs and the resorts in this area are built on the clifftop.  A couple such as Plaloma Resort and Top Resort have access to the sea, but no sandy beach.

On the beachfront, Kacha Resort have now built a new hotel block by the beach ( opened December 2014 ) and a couple of smaller resorts nearby – Apple and Bamboo were also totally rebuilt before the start of the 2015-16 High Season.  Morphing from old bungalow resorts to small hotels, with two floors of hotel rooms replacing stand alone bungalows.

Both new resorts have a U shape design with a pool between the two hotel wings. And a little further south still what was Baan Thai Resort , which was only built 10 years ago, has now been reborn as a large concrete monolith called ‘DuTalay’ which seems to be targeted at Chinese visitors.  As with the aforementioned new resorts, the aim now for resort owners on White Sand beach is to pack as many rooms into their limited space as possible.

If you budget doesn’t run to a pool villa or even a two star, then Alina Grande has acceptable, spacious mid-price rooms on the inland side of the main road. Some recently renovated beachfront bungalows are also available at the often overlooked Grandview Resort which never seems to get a mention in guides.  But it has far better quality rooms than many other resorts on the beach.   This used to be a bit slummy and run down, but I was surprised at how nice it looked last time I visited.   It isn’t the best known of resorts, but worth checking out if your first choice is full or too pricey. Again, the beach itself isn’t great. In fact it’s non-existent, only stones.

Sea Bar is the most popular beach restaurant in this area and is worth trying if you want to dine on the sand in the evening.  And to the rear, on the main road there’s a nightly streetfood market. A good place to play ‘Guess what type of meat on a stick that is’ and buy inexpensive snacks, smoothies and Thai staples such as Pad Thai and Somtam.

At the entrance to Grand View is ‘Marin Coffee’,  a very good coffeeshop & nice place to escape the heat and cool off in some aircon whilst watching the sweaty world pass by outside. To the right a huge new Makro Cash and Carry opened in early 2016.  This caters to visitors who require a 24 pack of toilet rolls, several cases of beer and enough snacks to feed a small army.

Directly opposite Grand View is a Tesco Express minimart and adjacent to this a shopping plaza, with various shops and restaurants along the roadside and in rarely visited units set back from the road. Head here for a new pair of glasses, mock-Mexican meal, have a massage, to buy a painting or suit.

A better reason to visit would be for a meal at La Dolce Vita, a good, well-recommended, Italian restaurant. Until early 2015, Koh Chang’s only real nightclub was also located here.  That has now been demolished and relative quiet returned to the area.

On the roadside, ‘Monkeys’, is a popular roadside restaurant with footie on TV, pool, and an extensive menu of decent Western food.  And that ticks all the boxes the typical White Sand beach visitor requires when it comes to finding a place to eat at night.  An obvious tourist trap and that’s what makes it so popular.

In case you’re beginning to panic that I haven’t made any mention of the nearest 7-eleven, fear not. A 100 metre walk from Grand View will bring you to the 7-eleven near Changburi Resort, and another 100 metres walk south brings you yet another 7-eleven on the opposite side of the road – ideal for people who don’t enjoy crossing roads. This area of roadside is also home to the ‘Little Pattaya’ beer bar enclave.

Anyone looking for a bit of adult R&R need only head to this cluster of bars which all follow the tried and tested beer bar formula of a square bar with stool seating on all sides and comely maidens serving up bottled beer and games of Jenga and ‘Connect 4’ until they get whisked away by lobster tanned tourists for a night of unbridled, wallet-emptying, simulated passion.   No flesh on show at the bars though,  that would be immoral.

So, if you’re feeling charitable and want to help improve the lives of ladies hailing from Isaan farming communities, they will all willingly accept cash donations in return for their valuable time. In fact, why not do your bit and stimulate the local economy further by barfining “Sister me” too? As charitable donations go, this is far more fun than buying a ‘Big Issue’ and more satisfying than sticking a folded banknote in a Unicef collection box at Christmas time. But it’s probably not tax deductible.

Behind these bars is a rundown apartment block with pokey studio rooms to rent cheaply. Why anyone would stay here is a mystery to me.   But I guess there is a certain lazy, hardcore whoremonging demographic to whom it holds a unique allure.

Also in the vicinity is Koh Chang’s only air-conditioned nightclub ‘Babylon‘.  Which has two floors a bar & restaurant and local and international DJs.

Reluctantly drag yourself away from the smut and sleaze of the bars ( Having first taken a couple of dozen photos of cute girls smiling & waving at you in order to illustrate the unholy godlessness to friends, family, co-workers, Facebook acquaintances etc) and head further south, up the hill and you’ll find Koh Chang’s best sports bar, The White Elephant, a large Scandinavian sports bar with the largest selection of beers on the island.  Their Wednesday & Sunday evening buffets are always packed.  This is the place to go if you are missing any live sporting event.  They have pretty much every major football, cricket, rugby or tennis tournament from around the world.

A little closer to the beer bars, but on the opposite side of the road are a couple of  quality places to eat ‘Invito Al Cibo’ , where the chefs were trained at the original Invito restaurant, now closed, which was, for many years , the best of its kind on the island and   ‘Restaurant by Jensen’, a small Danish restaurant by a Danish chef called, you guessed it, Jensen.

At Top Resort, ‘Paul’s Restaurant ‘ serves up Thai and Western food but the founder, Paul, has now moved on.  So whilst the views are still great from the cliff top terrace, the food isn’t what it once was.  Also by the roadside at Top Resort you’ll find ‘The Bavarian’, Koh Chang’s top rated, and only, Bavarian restaurant.

Large resorts in this area include Plaloma Resort, Top Resort and Koh Chang Hut, all on the cliff overlooking the sea. All relatively inexpensive 2 star places to stay and all with good sunset views from the clifftop.

Moving further up the hill the roadside is dotted with small guesthouses and bungalow resorts, many of which will do good deals on long term rentals. There are also a few more small beer bars, the names seem to change regularly , as this area doesn’t attract too many visitors in the evening.

Moving further on, there isn’t much of interest, Anna Store is a popular stop for expats as they stock a pretty good selection of imported and hard to find foodstuffs. Another 400 metres further on, we’re at the southern end of the built up area of White Sand beach.  Here you’ll find Bangkok International Clinic. This isn’t a cheap place to get medical treatment. It’s set up solely to cater to visitors with medical insurance.

They don’t care what they charge you and you don’t care as the insurance is paying. A win-win situation for everyone except those without insurance.

So prices are far higher than you’d pay at a private hospital run by the same company – Bangkok Hospital Group – on the mainland in Trat, Chanthaburi or Bangkok.   But they do provide as good a medical service as you would get at home, with English speaking doctors, translators and all the shiny bits of hi-tech equipment you’d expect a private clinic to have.

You’ll also pass by  a large monkey statue, this marks the entrance to what was a Monkey School.   Fortunately it’s now closed.

Directly opposite the Clinic is the last of the attractions in southern White Sand beach – the Naval shrine.  The Thai Navy own this part of coastline and also have their own small, private (unsignposted) resort here.

Take the steps up the hillside opposite the entrance to the International Clinic and you’ll come to a small shrine to the founder of the Thai Navy,  Admiral Krom Luang Jumborn Khet Udomsakdi.  This looks out over the ocean from the clifftop.  If you are dragging reluctant kids along with you, there are also a couple of WW2 era  anti-aircraft guns on display as part of the shrine, which they can play with.  It’s also a great spot for a panoramic sunset view.

The video below takes you through the southern section of the beach.  Sit back, crank up the volume and enjoy two minutes of top scooter cam action showcasing the best of roadside life at the south end of the beach.

Hotels on the southern half of White Sand beach

These resorts and bungalows are towards the south end of the beach and on the road leading up the hill towards Pearl beach.  All are bookable on booking.com.   The price shown is a typical high season nightly rate.  It may well vary and expect it to be higher at holiday weekends and during peak season.

Keereeele Resort – Hotel rooms with all facilities, but no pool, 1,800 Baht

Giant Bungalow – Spacious, no frills, AC bungalows on the roadside south of the beach – 1,400 Baht

Next: Around the corner to Pearl Beach 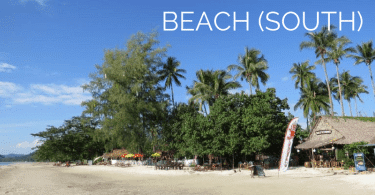 Easy going Bailan. The flashpacker's favourite. A quieter alternative to Lonely beach for traveller's who value their sleep.