A lot of people now combine Siem Reap and Koh Chang during their trips to this part of the world.   I recently went to Siem Reap, partly as I hadn’t been there for around 15 years, and had heard it had changed a little in the meantime and partly to check out how easy it now is to get between Koh Chang & Siem Reap cheaply, safely and with as little hassle as possible.   There’s a lot of conflicting info on this on the web,so I wanted to see for myself.   ( The ‘Getting Here’ section will soon contain a page about this. )

I only had a short time in Siem Reap and didn’t want to rush round Angkor Wat, so decided to visit Beng Melea temple, about 70Km from the town.   There are various way to do this – a motorcycle taxi, tuk-tuk, car & driver are all possible. With a tuk-tuk for around US25-30 for the day being a good compromise.   But instead I decided it would be more fun to see a bit of the real Cambodia on the way and booked a cycling tour there with Grasshopper Adventures.

I’m not usually one for tours, but as I hadn’t a clue how to get there by bicycle on my own and I figured that as it was a quieter time of year it wouldn’t be a big group, I opted for the tour.   Turned out that there was only me doing the trip anyway, so it was just me and the guide, Sum, pedalling along mainly dirt roads through hamlets with no electricity but lots of smiling kids who came out of their huts to wave and shout “Hello” as we rolled past.  Fortunately the weather was good all day.

We stopped three times on the way for a drink and to see a bit of local life and arrived at Beng Mealea late morning. There we were met by another couple of guys from Grasshopper who had come to take us back to Siem Reap by minivan.   So after a slap up lunch –   starters were a plate of fried crickets and Lotus seeds and then three Cambodian dishes with rice which we all shared – in a restaurant by the temple entrance it was time for a wander around the temple.

Beng Mealea is an un-restored temple, rather like Ta Phrom in Angkor Wat which is most people’s favourite as it has trees growing over the ruins and far more of an Indiana Jones / Tomb Raider feel to it. Also, Beng Mealea isn’t a huge place, easy to see it all in an hour or so, so you don’t get templed-out by a visit there.   There’s more than enough to see to keep your interest if you are an architecture buff but not too much so as to bore kids or anyone with a short attention span.   There’s a US$5 entrance fee that isn’t covered by the main Angkor Wat entrance ticket. 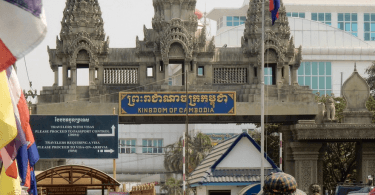 Getting to Phnom Penh by Private Car or Minibus The most popular route from Cambodia to Koh Chang is from Siem Reap to Koh Chang, but more people are either coming from Phnom Penh to the island...read more...