Original article is from 2013.  But I’ve added some updates

The last time I was on Koh Kham was a few years ago, ( some pictures here of ‘Koh Kham Under Construction‘ ) , but since then things have moved on.  The super luxury resort, that was to be called ‘Ananya Hideaway’ is around 70% complete and construction has stopped.  The majority of the workers have gone home and just a handful remain whose job it is to keep the place in good order, water the plants and sift the brilliant white sand.

As of 2020, the island is open to visitors who have to pay a 100 Baht entrance fee. But the majority of visitors opt for the combined boat and entrance fee service that runs hourly from the pier at Koh Mak Resort to the island.  This is 200 Baht per person.

When the resort was being built it looked a bit like a concrete monstrosity, but now that many of the pool villas are completed I can see what the idea behind the design was.  Climbing plants are now covering all the concrete surfaces.  When the resort is finished , if it ever is, all concrete will be covered by the creepers and from a distance you will just see green.

The resort will blend in with tree cover on the island. The resort was designed by one of  Thailand’s leading architects, Duangrit Bunnag, who has designed some amazing structures in the past – yet it doesn’t appear in his company’s website portfolio.

The one odd part of the design is that the front of the villas is entirely glass.  So they are very bright inside.  However, virtually all the villas face south – so it’s going to get very warm in there during the daytime unless the curtains are closed.

In 2014 the resort was raided by armed National Park officials and marines who declared the whole place illegal.  There are a couple of photos in this news report from a Thai paper: https://mgronline.com/local/detail/9570000097558

So the owner, whose family apparently made their fortune from seafood restaurant in Sriracha,  has been trying to sell the island.  The asking price is 1.5 Billion Baht.  But no takers so far. Before you feel too sorry for him.  Here’s another Thai newspaper article about him crashing his million dollar Ferrari in 2018 – https://www.thairath.co.th/news/local/northeast/1355367 so he isn’t too hard up for money.

Koh Kham is only a short kayak paddle from Koh Mak and is well worth a visit before it becomes an island that is off limits to all but the super rich.  The white sand beach has the whitest, powdery-est sand you will find anywhere.  Which is one of the reasons is that there are staff whose  job it is is to just sieve the sand, filtering out any dirt.

I’ve included an advert in the photos below which appeared in a magazine in 2009 for the upcoming resort. 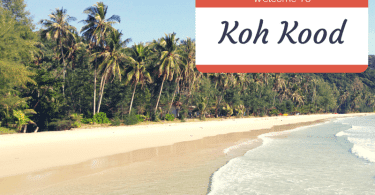 ( Find up to date information in the Koh Kood guide. ) We decided to take a quick trip down to Koh Kood for Christmas.  Just a couple of days, as our guesthouse was full and...read more...