These are some of the oldest photos of Koh Chang, Koh Kood, Koh Kradad & Koh Mak that you will see.

The photographer was an American Soil Scientist and John Hopkins University Professor, Robert Larimore Pendleton .  He spent a lot of time in Southeast Asia before and after World War 2.  And was also an avid photographer. He took photos of everywhere that he travelled in Thailand.  These are just a small part of his collection and were taken whilst he was researching his report ‘Soils and Land Use in Peninsular Siam‘.

After WW2, he returned to Thailand to work for the United Nations and advise the Thai government on agriculture.  In 1948 he was awarded ‘Knight Commander of the Order of the Crown of Thailand’ by the King.  He died in Bangkok in 1957 aged 66. 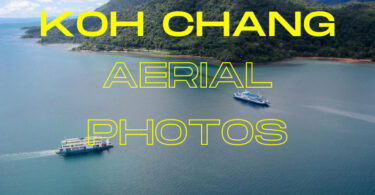 These photos were taken by Nu from a police helicopter in July 2020. The helicopter was being used mainly to monitor ferry queue over the long weekend holiday at the end of July.