I usually drive when I go back to Bangkok.  When I say usually, I mean always with , I think, three exceptions during the past 10+ years when I used one of the van services.  This meant that I hadn’t ever flown on Bangkok Airways non-stop Trat to Bangkok service.  A mere 40 minute sky hop.  But last week, as someone had kindly paid for me to fly, I flew instead of driving. I also thought it might be fun  to compare travelling time as, in theory, flying will save you time.

The plane ticket cost 2,750 Baht.  Plus another 470 Baht for the minibus from our place to Trat Airport.  During the low season, plane tickets can be had for around 1,300 Baht all in.  But my trip was booked last minute so there were no cheap tickets available.  470 Baht is the official price for the minibus ticket, that’s the price you’ll see charged by most tour agents on the island.  I paid the ‘agents price’  – which is much less. :-)

So, with a bit of planning in the low season, you’re looking at around 1,770 Baht total if you fly. Approximately double the cost by minivan.

I flew on the lunchtime flight, PG306, so was picked up at around 09:45.  The flight departs at 13:15.  The airport minibuses always pick up 3 and a half to 4 hours before the flight is due to depart – just to make sure everyone gets to the airport in plenty of time for the flight.  We got there about an hour and  a half before departure time and so had plenty of time to enjoy all that Trat Airport offers.

Trat is a nice little airport.  Not a lot to do there, but there again there are only 3 flights a day.  Our flight had around a dozen passengers.  So check in queues weren’t too long.  Bangkok Airways lays on free snacks for passengers.  You won’t be amazed by the choices available.  But there’s some coffee, fruit and cake. Plus newspapers, a couple of internet terminals and a TV which just shows catwalk parades from Fashion TV.

Optimistically, Trat Airport has a gate for international departures – despite not having any international departures, which makes me wonder if it’s being used for CIA renditions.  It also has a wall clock which shows the local time in far off Bangkok.  Unsurprisingly, this is the same as the time in Trat.  The toilets are also worth checking out as they have won an award, they meet the international standards for public restrooms – so well done to the cleaners.

The flight itself is uneventful.  On a clear day there will be some very nice views. Unfortunately, it was pretty grey and overcast when I flew.  As soon as the plane , an ATR-72, is in the air, the stewardesses rush round with the in-flight snack box.  You have about 20 minutes to finish it before the descent to Suvarnabhumi begins.  This also allows you time to skim through the in flight magazine to see if your website gets a mention.  As luck would have it, mine does.

We landed early and once through Baggage Claim the time was 14:40.  So total travelling time is about 90 minutes faster than if I took the van.   From the airport it’s just  a matter of either taking a taxi, or the train into central Bangkok.  The train is cheap, 45 Baht,  and hassle free – if you are staying on a hotel near the skytrain route then this is a good option. 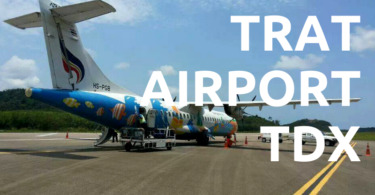 Trat Airport (TDX) is the nearest airport to the islands of Koh Chang, Koh Kood and Koh Mak. It’s a charming little airport with a maximum of four flights per day arriving and departing. ...read more...

Suvarnabhumi Airport (BKK)is the the main gateway to Thailand for tourists. The location of Bangkok’s international airport, around 30Km east of the city centre, makes it relatively quick and...read more...