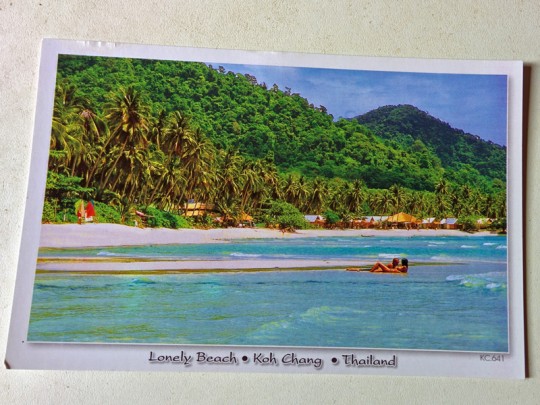 All the following are from White Sand beach.  The original photos used on the postcards are over a decade old. As these are from the same beach, I’ve added a photo of the current view from roughly the same spot.  Overall, you’d say the development hasn’t trashed the beach too much.  If this was Samui or Phuket the greenery would have been cut down long ago.

One resort that has hardly changed over the years is BanPu Resort near the south end of White Sand beach.  About the only thing that has changed in a decade are the sun umbrellas. This photo can’t be more than 10 years old as, as the far southern end of White Sand, the umbrellas from Changburi Resort are visible.  When we first came here in 2003 this land was all vacant.  There used to be a weekly market with stalls laid out amongst the trees leading down to the shore.

Looking south along the beach towards Mac Resort, with the red roof and Koh Chang Lagoon Resort – you can just see the green roof tiles.  I couldn’t get as wide an angle, and also you can see how the trees by the beach have grown to obscure buildings and the outline of the hills in the background.  A lot of palm trees have gone but it’s good that many of the beachfront trees still remain and are thriving. 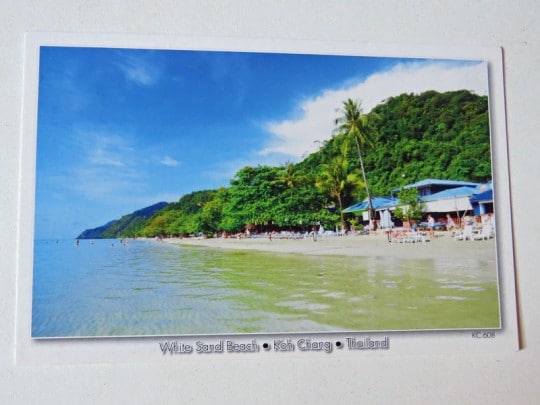 The blue-roofed building is the original Bamboo Resort in the centre of White Sand beach.  This was entirely rebuilt last year.  However, one building, the smaller blue roofed bungalow under the palm tree is still there.  If you look carefuilly you’ll spot that the tall palm tree has gone but the smaller one remains – and that hasn’t grown in the past decade.  simple answer for this – it’s a variety of coconut palm that is much shorter.  Much better to have these ion your garden as they provide much more shade and you just need a short ladder in order to get the coconuts.

These two are virtually the same view, although I didn’t realise it when I bought the cards.  If I had, I wouldn’t have wasted 7 Baht on a superflous card.   The difference in the two views is that in the second photo a wider lens is used and the photo has been flipped 180 degrees, so it’s the mirror image of what you actually see.  ( It took me a while to figure that out. )  The top photo also has a bit of amateur photoshopping going on in order to elongate the beach on the right hand side.  Easy to spot as the clouds repeat themselves three times.

The thatched roofed building in the foreground is the old bar and beach restaurant at KC Grande Resort.  There’s no sign of that building now, that was knocked down a decade ago.  The only structures that look similar in the modern day photo are the white bungalows with green roofs from Sangtawan Resort, 100 metres down the beach.  They are still there.