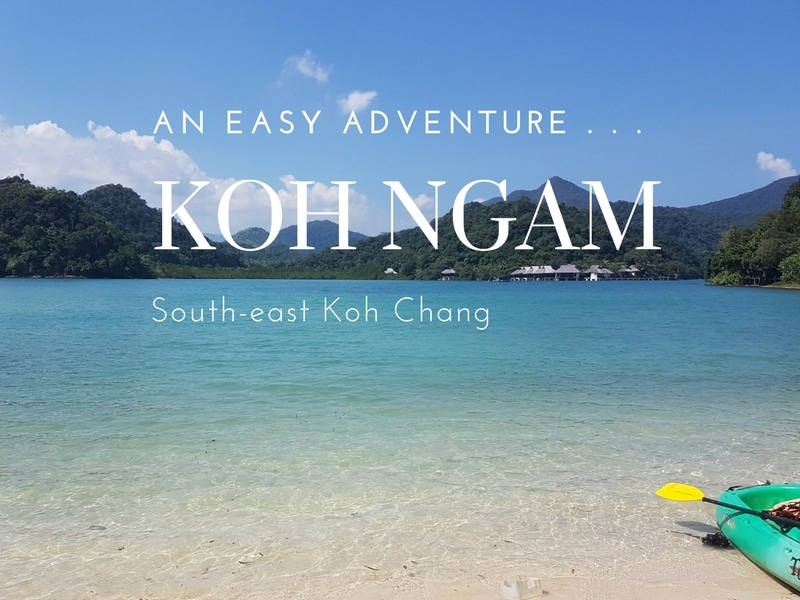 It’s been a couple of years since I went to Koh Ngam, so instead of writing a new post about the island and getting there, I thought I’d update this old post.  I’ve left the original photos from 2010at the bottom of the page, so you can see how it has changed.

To get there you just take the paved road all the way past Long beach to Tantawan Resort.  This upmarket resort has bungalows built over the water for about 3,500 Baht  / night but rarely gets guests due to its remote location.  This road used to be a dirt track until early 2017.  But is now easily passable by car.  There’s no public transport to this part of the island.  So either rent a scooter or car from your hotel or any tour agent near your hotel.  Long beach is about an hour from the west coast of Koh Chang.

Tantawan have a handful of kayaks that they rent out for just 200 Baht per day.   Then it’s just a matter of a short 10-15 minute paddle to the island.  The island is basically a mini Koh Phiphi, with two islands joined by a narrow strip of land with north and south facing beaches.

There are toilets on the island and a lovely grassy area where you can picnic under the palm trees.  But take your own food and drinks ans there’s nothing available on the island.  You could also hire a speedboat to do a tour of the islands in this area.  You can see one of the Kai Bae Hut speedboats in the photos below.

If you want more exercise then Koh Laoya is around 40 minutes away or if you want to be adventurous the much larger Koh Maisee Yai is to the south.  No boat trips from Koh Chang go there and there are just  a handful of fishermen living on this very large island.  Figure on 3 or 4 hours or so to paddle to it and back.

Some photos taken around the Hat Yuthanavy area in the far south east of Koh Chang in late May.

On the way there   I noticed a narrow dirt track and headed off to check it out and found a large area of land, around 30 acres, that was illegally cleared last year.   A government sign on the land indicates that this land can’t be owned by anyone and development of it is prohibited.   No photos as there wasn’t much to see other than   a large cleared area.

Moving on we come to a new resort being built by Thailand’s CP Group, who have huge land holdings on Koh Chang in addition to several resorts, ferry company, prawn farm etc.   The resort should be opening in time for next high season.   The bungalows not only come with great views out of the windows, they also have a perspex area in the floor allowing you to look down to the sea and imagine you are in the Maldives.

Finally, some pics from the nearby island of Koh Ngam, home to Analay Resort, within 30 minutes of arriving the sunshine was rep0laced with very grey skies as a storm blew in.   We made it back to Koh Chang, in our rental kayak, with a few seconds to spare before it hit.

The area in question: