All good things must come to an end and I just realised that I hadn’t mentioned that the establishment that was solely responsible for putting Koh Chang on the backpacker’s map had closed for good.

When I first came to Thailand I stayed in a 50 baht/night dorm room off Khao San Road and met a guy who told me stories of a beautiful beach on Koh Chang, totally undeveloped apart from one place to stay at it’s southern end. To get to the beach you had to walk over a hill and then gingerly down a steep slope, with the help of ropes as there was no road. Neither was there any electricity. He’d buy gunpowder in Bangkok take it down there and spend the evenings getting stoned and making rockets to fire across the bay. That was the night’s entertainment. No music, no parties, no movies, no live football.

This was over 15 years ago and the huts were the Treehouse on Lonely Beach. The original huts went under the bulldozer about 3 years ago but the bar and restaurant over the sea survived until a couple of months ago. The building is still there but now deserted. Nearby the landlord is building new, sterile concrete bungalows on the site of the original 100 baht a night bamboo huts on Lonely Beach.

No doubt there are a few thirty somethings with fond memories of the Treehouse in its prime. Time to light up a herbal cigarette and down a bucket of Mekhong whisky & Redbull in memory.

Some photos I’ve ripped off from Flickr and elsewhere of The Treehouse in its former glory plus some taken in late Oct 2010. 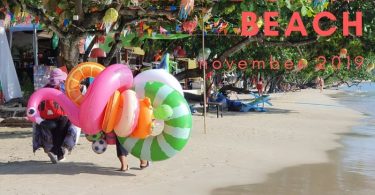 White Sand beach is by far the busiest on the island.  And during high season the stretch that runs parallel to the main road gets extremely crowded.  During the day with sun-worshipers and...read more...