New ferry routes will be introduced in the Gulf of Thailand and along Bangkok’s canals under a plan drawn up by the Transport and Tourism and Sports ministries. Deputy Transport Minister Anurak Jureemart and Tourism and Sports Minister Weerasak Kohsurat, both from the Chart Thai party, said that if implemented, the plan would feature new ferry routes in the Gulf to serve both passengers and cargo, the development of ports along its coasts, the zoning of beaches and upgrading tourism services on Bangkok’s canals.

According to Mr Anurak, there will be six projects to serve their idea.

Firstly, both ministries will push for concessions for ships that will ply between the towns on the east and western coasts of the Gulf.

That should reduce the need for cargo trucks seen as a source of bottlenecks on the south-bound highway in Phetchaburi and Prachuap Khiri Khan provinces. This should greatly improve the traffic situation and in turn benefit tour buses and passenger cars in the upper Gulf.

Secondly, the ministries will promote the use of speedboats, such as hydrofoils, to ply between the eastern and western coasts of the Gulf and between the region’s tourist destinations.

Thirdly, the ministries will promote waterway tourism in the Chao Phraya river in Bangkok, Ayutthaya, Nonthaburi and Samut Prakan provinces.

Such activities in canals around the historical Rattanakosin island, including the Phadung Krungkasem canal, would also be encouraged.

On top of that, beaches in tourist towns would be zoned for water sports and to offer natural retreats.

The plan also includes the setting up of more marinas and floating markets.

”Although the Transport Ministry is the one which supervises the ports, it does not know how to promote them. The Tourism and Sports Ministry knows very well how to do that, but can’t do it without their cooperation.

”As the ministers of both ministries are from the same party, we can talk. With their cooperation, I expect a new era of waterway tourism,” Mr Anurak said.

Both ministries will form a joint committee to work out the details of the six projects.

Supoj Saplom, director-general of the Rural Roads Department, said a ”Thai riviera” project proposed by his department would help support the ministries’ projects as it called for road improvements for a combined distance of 615km along the western coast of the Gulf of Thailand.

If all goes according to plan, the riviera project will connect over 100 tourist destinations in Chumphon, Prachuap Khiri Khan, Phetchaburi and Ranong provinces.

The department has finished the design of the riviera and is now awaiting its environmental impact assessment report. It will take nine years and an estimated budget of 6.89 billion baht to complete. It will begin with the construction of 81 routes, worth 300 million baht, in the first phase next year.

Mr Supoj said the road project was proposed so that it could be adjusted to bring improvements to ports along the coast.

As of mid 2009, no sign of a Samui – Koh Chang hydrofoil service yet.   Or any large scale new boat services in the   Gulf of Thailand for that matter.

In mid December 2019 a meeting was held in Dan Mai, on the east of Koh Chang to discus proposals for  a new ferry pier. At present Koh Chang is served by two ferry companies that run vehicle...read more... 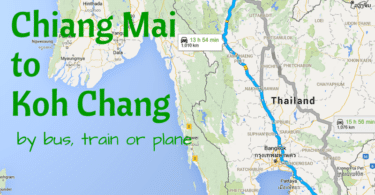 Although Chiang Mai is Thailand’s second largest city, there is no direct transfer in any form to Koh Chang. You have to go to Bangkok first and then onto Koh Chang. This also applies if you are...read more...