Koh Man Nok is a couple of kilometres off the southern tip of Kai Bae.   However, unlike it’s sister island, Koh Mak Nai, there is no beach and therefore the island is rarely visited. The island is best viewed fro the west – the stark rock and huge boulders are pretty impressive. Plus you will often see locals out fishing off the island’s north-eastern shore.   But other than that no reason to go there.   No sheltered areas with calm sea for snorkelling but if you did head here by kayak and needed to stop there is a small area of broken coral on the northern tip where you could pull the kayak onto the island.

Worth Visiting? No. Some rock formations that amateur geologists might enjoy – but nothing for anyone else. 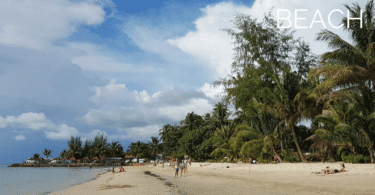 Walk to Koh Chang’s ‘Secret’ waterfall Updated for 2018-19 from my original 2011 post. Kai Bae Waterfall doesn’t merit a mention in any of the popular guidebooks for Koh Chang...read more...