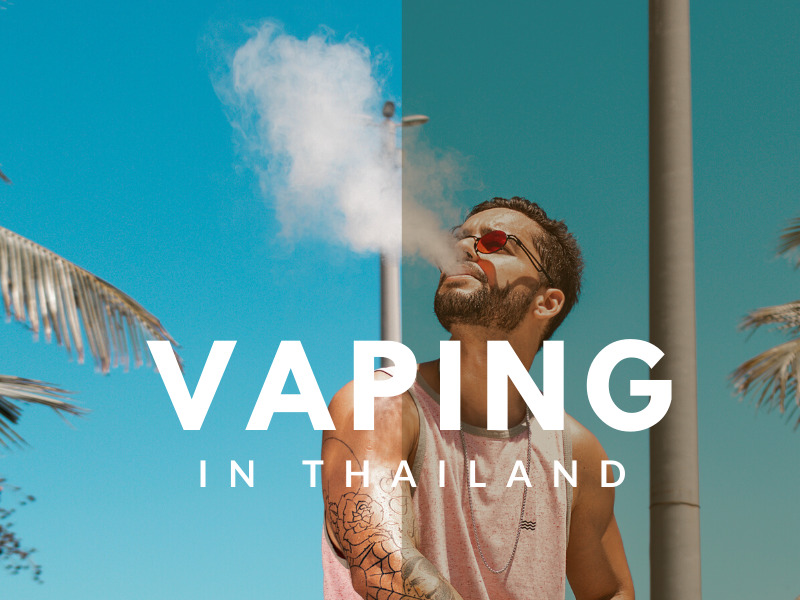 Is Vaping Legal in Thailand?

No. Vaping in Thailand is illegal. E-cigarettes and e-baraku are prohibited, as are juice refills.  They have been banned since 2014.

There are various tiers of penalties, but being caught vaping or even with an e-cigarette in your possession, could result in a fine of up to 30,000 Baht and a jail sentence of up to 10 years. This isn’t widely advertised but you will find warnings on Thai Embassy websites and also government websites – for example the Thai Embassy in the UK.

This tough stance was reiterated in August 2022, following the legalization of marihuana in Thailand.  ( Yes, weed is legal but vaping isn’t. #AmazingThailand )  Deputy Prime Minister and Public Health Minister Anutin Charnvirakul reaffirmed the ban on the import and use of e-cigarettes. He stated that e-cigarettes pose significant health risks to users and that vaping was helping to create new smokers particularly among young people in Thailand.

Despite this, Thailand’s illegal e-cigarette market has grown dramatically in recent years.  In 2019, it’s overall value was estimated at between 3 to 6 Billion Baht (USD 100 – 200,000,000).  This is a large amount, but is still only 5% of the entire tobacco industry in Thailand.

This still isn’t common knowledge among tourists.  But there have been numerous news articles of tourists being caught vaping and heavily fined.

Most recently, in January 2023 a Taiwanese actress was caught with a vaper and extorted for 27,000 Baht by Thai police.  She posted about this on social media and started a war of words with the Thai police.  The end result, police were removed form their jobs, the actress received an apology and it was confirmed that vaping and possession of vaping equipment is illegal.

A prominent lawyer confirmed that using a vaper in public violates Section 42 of the Tobacco Control Act, which can result in a fine of 5,000 Baht. In addition the lawyer added that individuals caught in possession of a vaping device can face a maximum of five years in prison and a heavy fine that is four times the device’s price.

Which partly explains the huge fines in these stories . . .

In one case, in Phuket in 2019, a Frenchwoman was fined 40,000 Baht and deported. She was stopped by police whilst holding a vape pen when she was a passenger on a scooter.  She went to court, had to hire a lawyer, paid a fine and then was sent to Bangkok to be deported.  The experience cost her a week of her freedom and 286,000 Baht in legal fees, expenses and fines.

And also in 2019 a soundman working for Dutch singer, Gerard Joling, who was giving a concert in the city, was handed a 30,000 Baht fine by Pattaya police.  Cops spotted him using his e-cigarette on Walking Street.  The singer tried to intervene and was also detained by police for a short period.

Therefore, if you are vaping in public in big cities, such as Bangkok, Pattaya or Phuket, you could find yourself in trouble.  An excuse such as you brought the mod in for your own personal use whilst on holiday and not for re-sale or any financial gain, isn’t acceptable to authorities.

The best advice if you want to vape in Thailand is do it privately, away from the eyes of others.  And if you are apprehended by the police, remain calm, don’t get into an argument, plead naivety and aim to negotiate a discount on any fine that’s issued.

Why Can’t You Vape in Thailand?

Vaping is relatively new. Therefore the laws regarding vaping are still evolving. Not only in Thailand but in many other nations.  This is because as new studies are conducted there is more evidence of how dangerous (or not) vaping and the use of e-cigarettes actually is.

The World Health Organisation (WHO) claim vaping is dangerous and the use of vape pens could cause serious health damage.  However, the potential for lung cancer and other health issues is still far lower than with smoking regular cigarettes. The WHO state that it is too early to provide a clear answer on the long-term impact of using e-cigarettes or being exposed to them.

The obvious question many tourists ask is that why why a device that is designed to aid people in quitting the habit is banned in Thailand.  The Thai government’s answer to this is that their import an use is banned on health reasons and also because electronic cigarettes lure young people into becoming smokers.

The Law Regarding Vaping in Thailand

There isn’t a law that specifically bans vaping and the possession or use of e-cigarettes.

However Section 20 of the Customs Act prohibits the import of electronic cigarettes (among other things).   As this section covers the category of goods that have not had tax levied on them and therefore their possession is illegal.

And Section 42 of the Tobacco Control Act prohibits the use of e-cigarettes / vape pens etc in public.

So vaping and possession hasn’t legally been banned.  But if you do have an e-cigarette in your possession then you must have brought it into Thailand illegally.  And are therefore breaking the law.  It’s an effective way for the government to effectively ban vaping without actually banning it. As the only way to get off the hook would be to show proof that you had brought your vaping equipment prior to December 2014, when the new laws was enacted.  In which case it was imported legally into Thailand.

Fines and Punishment for Vaping in Thailand

The penalties for vaping depends on the circumstances and situation.  There are five possible penalties that the police could impose.

The lightest punishment is a fine of up to four times the value of the vaping equipment.  However, that would require the police to determine the value of your mod or e-cigarette.  So the alternative is to levy a fine of up to 30,000 Baht.  this is much easier for the police to do as firstly, the fine can be arbitrary depending on the situation, officer’s mood, person caught etc. And also it can be open for negotiation.

In addition there are jail terms of up to a year or up to 10 years.  These penalties would require a court appearance and the length of sentence would be decided by a judge. This type of sentence is intended more for distributors of illegally imported vaping equipment, rather than casual users.

Will Vaping be Legalized in Thailand?

No-one knows. But as it’s popularity increases around the world, there’s sure to be more pressure on the government to enact new legislation. In 2018, there was a report in the Thai news that the government was planning to tax, and therefore legalize e-cigarettes and vaping liquids, which would lead to them becoming legal in the Kingdom.  But this hasn’t happened yet.

In August 2022 the Thai government confirmed their tough stance on vaping – despite legalizing marijuana a couple of months earlier.

Resources for Vaping in Thailand

There’s a very active Thai and expat vaping discussion board at https://www.thailandvapers.com/.  And a quick search of Facebook will reveal numerous groups and online stores selling vaping mods and liquids in Thailand.