Home » Blog » Tap Water in Thailand – Is it Safe to Drink? 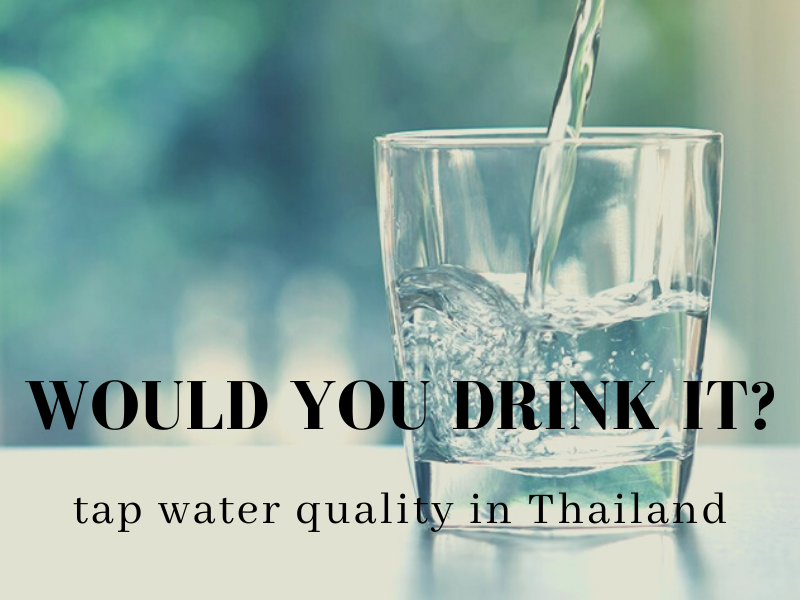 Can You Drink the Water in Thailand?

Many people worry about getting sick on holiday and especially from drinking unclean or contaminated tap water.  Two of the most common questions that are asked on discussion boards and Facebook groups are ‘Is it safe to drink the water in Thailand?‘ and ‘Can you brush your teeth with tap water in Thailand?‘.

The reason being that in the US or Europe pretty much everyone is happy to drink water straight from the tap.  There’s no real need to buy bottles of water unless you want something exotic like Evian or Perrier.

But here in Thailand, and many other developing nations, the perception is that the quality of tap water is very low.  This isn’t a perception that only foreign tourists have.  To be honest, most Thais also think the tap water isn’t clean enough to drink, even in Bangkok.  Which is why bottled water is for sale everywhere you go and many Thais have simple water purification systems in their homes.

So, let’s look at the facts.

Firstly, there isn’t a simple Yes or No answer for the entire country.  I’ll break it down to Bangkok and everywhere else . . . .

Is it Safe to Drink the Tap Water in Bangkok?

Bangkok’s tap water has met World Heath Authority quality guidelines for over 20 years. So ignore those websites that simply tell you to avoid drinking the tap water in Bangkok, but don’t give any reasons why.

Tap water in Bangkok is as safe in theory as the tap water in any developed city worldwide. This means that there’s no need to boil or treat it before drinking.  Bangkok’s tap water is certified safe for brushing teeth, showering or making a cup of coffee etc.

The Metropolitan Waterworks Authority is the organisation responsible for Bangkok’s water supply. Their website is available in Thai & English.  These are the World Heath Authority guidelines on tap water quality:

If you’re a serious water quality nerd, real time water quality checks are available online, in English, from testing points at pumping stations and various large businesses across Bangkok.  And this PDF, also in English, is a detailed explanation, with photos, of Bangkok’s main tap water treatment plants, including how the water is treated and tested to meet international standards.

However, it’s worth noting that although it is safe to drink the tap water in Bangkok, it’s not something most Thais do.

The MWA estimate that only around 10% of Bangkokians actually drink the tap water. This is partly because of a distrust of anything the government tells them.  But mostly due to the massive amount of money that companies spend advertising their own brands of bottled water to locals.  It’s a huge market.

A final factor that affects whether people feel safe drinking the tap water is the pipes that bring the water from the treatment plant to their home.  There are a lot of scare stories about this.

However, Bangkok’s pipe network is a closed network and has been laid far more recently than many found in cities elsewhere in the world.  And, secondly, the MWA is transparent about the water quality across the city.  There’s a link above to the real time statistics from testing points in locations all across Bangkok.

In a bid to encourage more people to drink tap water, the MWA has also installed water fountains across the city centre. These provide safe, clean drinking water.  If you are out and about and need to refill your water bottle then you can use on of these.  However, you’re unlikely to see any of the locals using them.

Another popular option for locals in Bangkok and around Thailand is water vending machines. These coin operated machines are hooked up to a tap water supply and have an additional filtration system built in.  At around 1 Baht/litre, it is much cheaper to use them to fill up a 15 litre flask than buy bottles from a shop.

However, a survey made by the subcommittee of the Independent Organisation for Consumers Protection showed that a great majority of water vending machines in Bangkok did not fill the requirements for safe water.  This was due to a variety of factors.  From the location – by a dusty road or near garbage bins or waste water outlets, for example. To filters not being replaced, rusting internal parts or unclean bodies etc.

So, whilst they can be a good solution, check the location and cleanliness of any water vending machine that you plan to use.

What if you Bottled Tap Water and Sold it?

That sounds like a great scheme.  As the tap water is potable and there’s a huge mark-up on selling it as bottled water.  Imagine the profits if you could do that?

Well, the Metropolitan Waterworks Authority, who’s responsible for the tap water in Bangkok, has been producing and selling it’s own brand of bottled water, called ‘Papa’ since 2004.  All they do is put the same water that comes out of taps into bottles.

However, they aren’t doing it to make a large profit.  Prices are kept low and the bottles are only sold though wholesalers, not in 7-elevens or supermarkets.  It is offered as a cheaper alternative to the ‘brand name’ bottled waters.

So if you go to a local restaurant or street stall in Bangkok and order a bottle of water with your meal, you may well be drinking tap water – but without realizing it. :-)

Is it Safe to Drink the Tap Water Elsewhere in Thailand?

Once you get outside Bangkok then the responsibility for providing potable tap water rests with the Provincial Waterworks Authority.  The good news is that since 1999 the PWA has been working on increasing the number of areas around Thailand which have safe, clean water that is drinkable from the tap.

Their website contains a list of 185 places and communities around Thailand where the tap water is safe to drink.  This list hasn’t been updated since 2016.  So there will be far more now.

However, as there’s no real way to know if the village or town you are visiting has safe tap water, then the best advice is to avoid drinking it. Regardless of what the locals tell you. Or or you do want to drink it, boil it first or use a portable water filter.

And in many areas, for example here on Koh Chang or on most islands, there isn’t a central water supply and a network of pipes to bring water to homes, hotels and businesses.  Water comes from wells and bore holes, or out of rivers in the hills.  Any treatment that the water does have is the responsibility of the house or business owner.

And this is the water that all but the most expensive restaurants will be using to clean and prepare food, as well as wash the dishes.  So, unless you plan on living on microwave meals during your holiday or cooking all your own food, your immune system will have to get used to ingesting some water that isn’t as clean as that at home.

Outside Bangkok, the water quality often varies greatly depending on the time of year. During and just after the rainy season there’s abundant water.  But by the end of the dry season (when most tourists visit Thailand) the underground supplies are running low and rivers are dry.  Water often comes from small, privately owned reservoirs that are continually dug deeper in order to find ground water.  This murky water is then pumped into tanker trucks to be delivered.  It’s at this time of year when tap water outside Bangkok often has a brown tinge to it.

Personally, I have never worried about using tap water to brush my teeth wherever I go in Thailand.  But have never drunk tap water outside Bangkok.  Mainly because of the ubiquity of bottled water and, after living in Thailand for over 20 years, it’s become habit.

Is it Safe to Have Ice in Drinks?

The vast majority of bars and restaurants will use ice cubes made in a factory that uses purified water. Ice cubes made this way will be a uniform shape, usually with a hole through the centre.

But you need to be careful with ice that is cut from a large large block.  It is much cheaper to buy a large block of ice than bags of ice cubes.  The downside is that the large block has to be hacked into small pieces. The actual block of ice is made from purified water, that isn’t a problem.  It’s how the ice is transported and cut that you have to worry about.

There’s a good chance the ice will thrown in the back of an old pick up truck.  Then offloaded and left on an old wooden table.  It will then be hacked into smaller pieces using one of the many machete-like knives that will be lying around the kitchen.  This is where the danger of bacteria in ice in drinks comes from.  Not from the actual ice itself.