Strange Tides in the Gulf of Thailand

In most areas of the world there are four tides per 24 hour period.  Two high and two low.

However, Koh Chang, and elsewhere in the Gulf of Thailand, experiences two tides every day instead of the usual four.

This phenomena occurs around the world in Gulfs and other semi enclosed areas of water.  And if you haven’t seen this before, it can spoil your vacation.  You can read a review and see it mentioning wide sandy beaches.  But when you arrive the beaches are very narrow and nowhere near as attractive.

If you visit Koh Chang when the low tide occurs usually during the day, as it does through much of the High Season, it means the tide may be low and the water shallow most of the day. Typically, this occurs from March until July.

At times of extremely low tides, June and July, it is possible to walk from Koh Chang to the nearby island of Koh Man Nai. A unique rainy season activity.

However, from November to February, the busiest time of year for tourists, there are some of the highest tides of the year.  The high tide often falls in the middle of the day and many of the beaches on Koh Chang are under water during daylight hours.  Great if you want to swim, not ideal if you enjoy sunbathing, long walks on the beach or have kids who want to build a sandcastle.

The strange tides in the Gulf of Thailand can inconvenience holidays more than most people imagine.

That is why you’ll often see complaints from people who visited Koh Chang or other Gulf islands, and said the water was too shallow to swim.  Or, if they visited at a different time of year, and posted that there wasn’t any sand and that the photos of the resort’s beach must be fake. 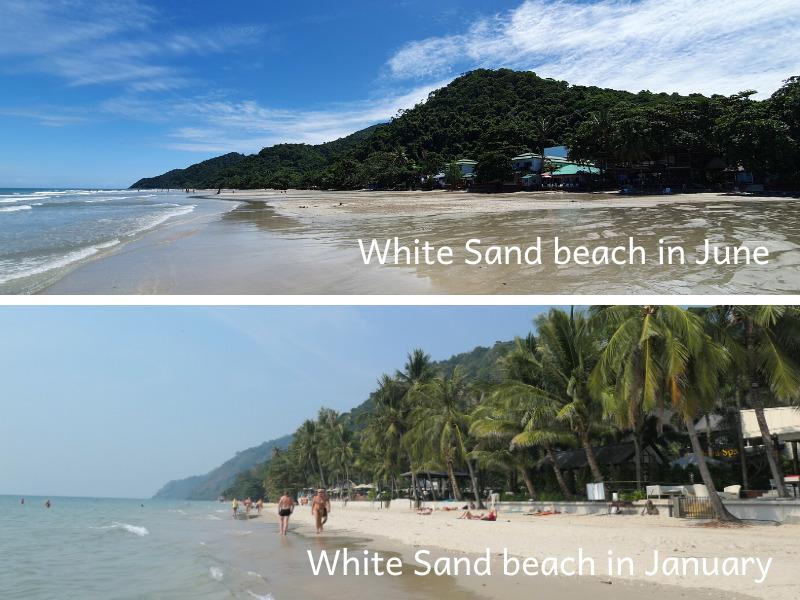 It’s very mysterious how the pull of the moon can be defied in this specific area. And this only occurs in the Gulf, go to Phuket or Koh Phi-phi for example and you’ll experience the normal four tides a day.

Why Does Koh Chang Only Have One High and One Low Tide a Day?

When you are in school you learn that the moon exerts gravity and moves the earth’s oceans.  This creates four tides, two high and two low, every 24 hours. Each day thus sees both one high and one low tide on all beaches, with the night experiencing the same up and down ebb and flow.

The tides of the Gulf of Thailand are a phenomena specific to enclosed bodies of water.  The same effect is seen in other areas such as the Persian Gulf, the Gulf of Mexico and Australia’s Gulf of Carpentaria.

The simply explanation is that when water runs up and down a channel, and two waves flowing in opposite directions meet, there’s collision and watery mayhem ensues.

The outgoing tide in the Gulf of Thailand runs south and meets the next incoming tide flowing north.  They basically cancel each other out.

That part of the conundrum is easy to understand.  But the rest of the story, about why a low or high tide can last all day for part of the year, involves complicated scientific formulae.  In 2001, two Japanese scientists published an article in the Journal of Oceanography  entitled ‘Seasonal Variation of Stratification in the Gulf of Thailand‘.

This provided calculated explanations that took account of, among other things: bottom topography and friction against it; changing depths; the water’s ‘horizontal eddy viscosity’; the ‘Coriolis force’; the right angle turn in the middle of the Gulf and the semi-diurnal tidal wave.

The end result, as you can imagine, was an explanation that only their fellow scientists can fully comprehend. So, there’s no point me going into it here.

As a side note, the tides also affect the areas of beach that are widest and have the most sand and deepest water.

How Does This Affect Your Choice of Beach or Resort?

The west coast beaches on Koh Chang all have wider stretches of sand, and deeper water, at the north end of the beach.

Therefore, if you want to swim and sunbathe on the beach easily during High Season (November to February) book a resort near the northern end of the beach.