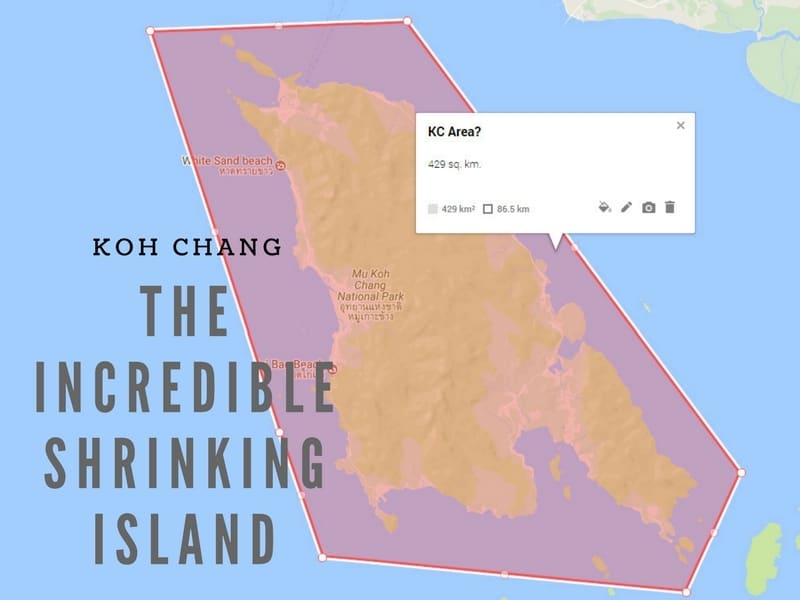 ** Good news!  Since I wrote this article Wikipedia has updated their site, which helped Google to get their facts straight too.  So at present, the correct size and information is showing in search results for the first time **

Koh Chang’s real size is half what you think it is.  The image above shows what 429km² looks like.  Perhaps Koh Chang has just shrunk over the years?

So, why do they say Koh Chang is second largest?  Because that’s what Google says it is.

Why does Google say it is?  Because that’s what Wikipedia says it is.

Why does Wikipedia say it is? The earliest reference online to it being the second largest island came in this Thaiways magazine article from 2002 which is quoted by Wikipedia.  I’m not sure where the very inaccurate area measurement was made up.  The earliest I can find is also from 2002 on the ekohchang.com hotel booking site.

But they didn’t randomly come up with the area, so I assume an entity with a great deal of authority, most likely the Tourism Authority of Thailand, gave an intern a calculator and they came up with the idea that Koh Chang was 429km².  And it stuck.  And no-one challenged it.  Despite it only taking 5 minutes to see it is obviously incorrect.

Phuket is by far the largest island in Thailand.  There’s no dispute about that. A glance on Googlemaps will show that is it almost 50km in length and 20km at it’s widest point.

What is the area of Koh Chang? How big is it really?

To get a more accurate measure of surface size there are free tools online that allow you to plot the outline of an island, or any section of the earth’s surface, and get the area.  Using these, Samui comes out on top and Koh Chang shrinks a lot.

Koh Samui’s area is around 238km².  The discrepancy between that and the result Google search shows is probably down to my not spending hours to accurately mark the boundary.

This is still about half of the ‘official’ size of the island. This discrepancy is due to a mistake that no-one has bothered to rectify.  And despite me pointing it out, I guarantee that for years to come websites will still refer to Koh Chang as Thailand’s second largest island.