The mangrove walkway in Salakphet deservedly gets a lot of praise for its views.  However it wasn’t the first walkway on the island built specifically to take people into the mangroves.  A couple of years prior to that being built, one was constructed in nearby Salakkok.

Initially it seemed like a good idea.  An 800 metre long concrete walkway was built that took visitors on a loop through the mangrove forest.  Construction wasn’t particularly eco-friendly , with a lot of mangroves being cut down to make way for backhoes and construction equipment. But when it opened it didn’t look too awful and there were a dozen stations along the route where information about the flora and fauna was on display.

Nowadays it’s run down.  Over the years the only thing money has been spent on is a four-storey viewing platform which allows visitors to get up above the treeline and enjoy a bird’s eye view across the mangrove forest.  The information stations have pretty much collapsed. An simple concrete marker, which is easy to miss when driving past, shows the entrance, which is overgrown with grass.

But it’s still a pleasant 15 – 20 minute walk, especially at high tide when you see the mangroves reflected in the water.  And, as a lot of the walk is in the shade, it’s much cooler than the Salakphet walkway  – which is open to the sun most of the way.

The walkway is a U shaped loop with two entrance /  exits located on the main road, opposite the entrance to Salakkok temple.  One way in is marked by a concrete sign and the other is located near a small restaurant and public toilet, around 100 metres away.  If you are going to Long beach, you will go past it.  Entrance is free.

Welcome to the mangrove experience.

One of the unnatural wonders of south-east Koh Chang is the recently (late 2005) completed (?) Mangrove walkway in Salakkok.

No workmen are at the site now, machinery has been packed away, construction is obviously – in the eyes of those responsible – complete or the budget has simply been spent.

Nature & concrete in harmony, not really. The idea of the mangrove walkway is on the face of it an admirable one, to give visitors to the island the chance to explore a mangrove forest on foot via a walkway on stilts. This is the type of eco-friendly idea that you can imagine a country such as Costa Rica pulling off successfully. Unfortunately Thailand isn’t Costa Rica and here concrete is king.

The walkway is, I’d guess, around 800 metres in length and is built entirely in concrete with supporting poles in the ground every 4 metres. Along it’s length are 9 stations where an information board provides a sentence or two of details about what you can see in the area. An attempt at mangrove education and you’ll also learn a little about the ‘Flicking Shrimp’ that you probably never knew before. Nice idea but not enough info to be truly educational. I can’t imagine many school field trips visiting.

Aside from pondering over the huge amount of concrete used in it’s construction, you’re also left wondering just how much mangrove was cut down as there are several large areas where tracks left by a large excavator are clearly visible. A method of construction that isn’t particularly in harmony with the ‘eco’ tag and probably not recommended in the ‘Environmentally Sympathetic Construction for Beginners’ manual.

The walkway is currently bare concrete but it appears as though it is due for a paint job. Judging from the patterns of bark, and wood pressed onto the concrete I’d say the whole thing will be brown just as soon as the paint budget is approved or a minor royal or cabinet minister deems the place worthy of a visit.

It’s worth a look though and there are some nice views along the way. However, it definitely won’t go down as a plus point for the local authority’s attempts at showing some concern for the environment as it has obviously been constructed with total disregard for the impact on the surroundings. The kind of impact only using heavy machinery to clear the way for the sinking of hundreds of poles in order to build a snaking 800 metre long path can bring.

It may come a pleasant shock to know that this isn’t the first attempt to bring mangroves to the masses in the area. On the main road, a kilometre before you reach the turning for Salakkok & Jek Bae, you’ll see a dirt track leading off to the left, this heads a few hundred metres along the northern end of the bay.

The original idea was that tourists could drive down here and see mangroves without ever having to get out of their car (it is hot after all). There are no signs of any kind and the road is a dead end, no views other than seeing mangroves that line the road. As you’d expect there was no road here originally, the track was made by dumping truck loads of earth on top of some unlucky mangroves. The edges of the track have been shored up by using concrete pipe sections as large plant pots.  ( This later became Salakphet Mangrove Walkway ) 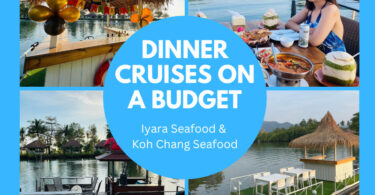