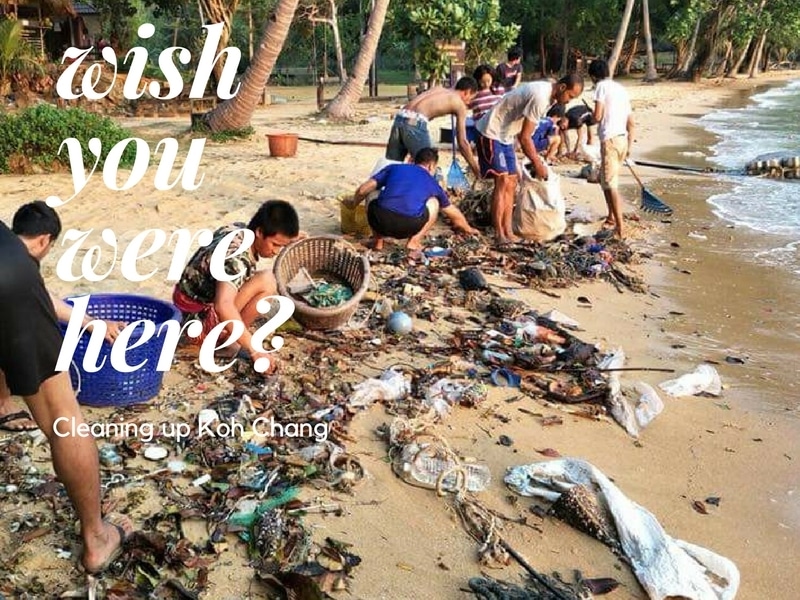 Beaches don’t always look like they do in the tourist brochures.  They are only clean because someone cleans them.  The reality is that if you decide to head to a remote, rarely visited beach on Koh Chang or anywhere in South East Asia, it isn’t going to be pristine.  Far from it.  It will almost certainly be covered with trash. Not dropped by locals or tourists but washed in from the sea.  The photo above in an extreme example of the amount that can come ashore in one small area on one day.

For the past decade, Koh Chang has had an annual cleaning day. This involved a lot of pomp and ceremony, free t-shirts all round, pats on the back from the Governor of Trat for the resort owners who lent their staff to the operation, plus a slap up meal at the end of the day for those involved in, what amounted to, about 2-3 hours actual cleaning work.  Job done.  The island was clean for another year.

But un-surprisingly, despite these best efforts, it wasn’t.

There is a public garbage collection service but their one truck can’t cope with the ever in creasing amount of waste and they don’t go around picking up all the litter that ends up on the beaches or is unbagged.  Most resorts, restaurants and businesses do a good job of recycling plastic & glass bottles and paper / cardboard.  These have value and are easy to sell to one of the recycling plants on the island.  That leaves individuals as being the main source of garbage.   Many workers & visitors think nothing of throwing waste by the roadside.  I often see Thai groups on the beach near us who come for a picnic with plastic bags loaded with stuff.  They depart, having packed their waste into bags – which is good, but then just leave the bags on the beach – rather than taking the extra step to take the bags to the nearest bin.

In May 2014 a group of people from Lonely Beach & Bailan decided enough was enough and got together and organised a clean up of the roadside in their area.  This informal group has now grown and clean ups have taken place in Klong Prao, Kai Bae, Lonely beach, Bailan and Bangbao.  Elsewhere on the island others have got involved, doing their own clean ups on White Sand beach and in Klong Prao.  In Salakkok the local authorities also mobilised villagers and staff to clean the roadsides.

The clean ups continued at irregular intervals in the following years. Taking place mainly in the low season when people had more time on their hands.  During High Season there was the occasional clean up, usually after Facebook posts commenting on the state of a particular stretch or roadside or beach.  But overall, nothing really organised or a concerted effort to clean the island.  And all the time the piles of garbage were piling up at the ineffective disposal plant on the island and more and more plastic was being strewn.

In addition underwater cleanups have been held several times a year in an attempt to deal with some of the waste that gets deposited out of sight.  Each clean up, hundreds of kilos of discarded fishing nets and junk are picked up from the seabed and corals at popular dive and snorkelling sites.

(These photos from various FB pages)

In mid 2017, a resort owner on Koh Mak established a chapter of TrashHero.org, with the aim of promoting weekly cleanups on the island and the eventual aim of making it the cleanest island in Thailand.  A lofty goal, but not impossible.  There are over 25 Trash Hero chapters in Thailand, each of which holds weekly cleanups.  A group of expats and locals plus tourists all join forces on Saturday mornings to tidy a specific beach or stretch or roadside.  There’s a very active Facebook page which keeps volunteers up to date and posts photos and videos of all the clean ups.

What does Trash Hero do?

The Trash Hero mission is to bring communities together to clean and reduce waste.

Action and Awareness.  They pick up trash and motivate others to do the same. By spending a few hours together picking up trash, people gain a profound understanding of the consequences of being careless about waste.

Education. They actively engage children and adults through connecting environmental values with hands-on experience of the impact that trash has on the local and global environment.

Sustainable Projects. They  create long-term programs that help communities to remove and better manage their waste, and strategies that will reduce the amount of waste being produced in the future.

Inspiration. They motivate people to become Trash Heroes in their everyday lives. With consistently positive messaging, and a philosophy of “small steps”, they remove the barriers to change.

It’s clear to everyone, apart from the local authorities, that Koh Chang has a garbage problem.  Residents see the problems the garbage collection service has.  Tourists see more rubbish on beaches and roadsides and comment on it on social media.  Undeniably, the roadside garbage originates on the island, but for many visitors and businesses the bigger problem is the amount that is washed up on the beaches.   There is a huge amount of debris floating around in the Gulf of Thailand just waiting for the currents to blow it onto a beach.  And a lot of this doesn’t even originate from Thailand but from Cambodia and Vietnam.

The problem reached a tipping point in early 2018 when unseasonal winds deposited even more garbage than usual onto the beaches.  It made the national news and during the worst periods, National Park officials on Koh Rang, south of Koh Chang, were picking up over 500Kg of debris off one beach daily. (The photo at the top of the page was taken at this time) Something had to be done.

The upshot was that in mid March 2018 it was announced that there would be an official Trash Hero Koh Chang chapter established.  It is still early days and so there have not yet been any announcements on how and when clean-ups will be organised.  But it is on the way . . .

Hiring a Catamaran or Yacht on Koh Chang Sailing around Koh Chang is increasingly popular.  Every year there’s a noticeable increase in the number of yachts visiting the island and I often...read more...