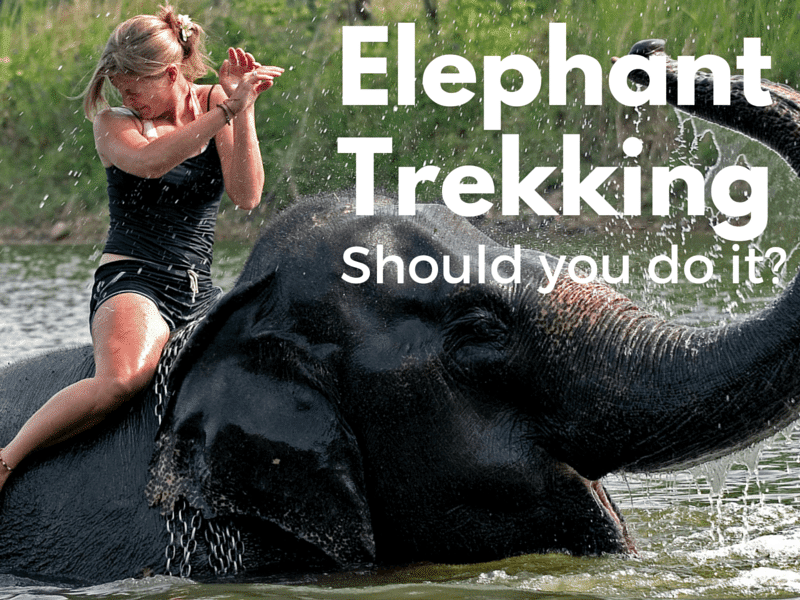 That’s a decision only you can make.  I’ve been on three elephant treks, on Koh Chang and elsewhere in Thailand but I wouldn’t do it again.

In an ideal world, there wouldn’t be any elephant camps on Koh Chang.  But visitors would be able to see either wild elephants in the jungle or there would be a place similar to Elephant Nature Park, where you could get up close with the animals without riding them.

In reality, there are no indigenous elephants on Koh Chang.  And it would be impossible, without a super rich benefactor, to buy or rent the amount of land required for an elephant sanctuary.  And yes, it would be great for everyone to boycott all elephant camps.  But all that will do is leave a lot of starving elephants.  Plus the problem of where would all the elephants go and who would pay to look after them.  Something that isn’t easily solved.

So, if you want to see an elephant – which a lot of people do as they are beautiful creatures to observe –  go to one of the elephant camps on the island.

The good news is that, finally, in late 2020, one of the elephant camps on Koh Chang took the plunge and decided to do away with elephant riding.

Where Are The elephant camps?

There are now six elephant camps on Koh Chang.   Four are located in the Klong Prao  area, by the roadside, one is in Kai Bae and one is in the north of Koh Chang, 2 kilometres down an inland valley.   All offer the same two types types of trek at the same price.   So the choice of camp is more down to how far you want to travel to see the elephants and also how much you want to see them in an environment well away from the main road.

For most visitors to Koh Chang the camps in Klong Prao & Kai Bae will be located closer to their hotel and so are within easier reach. However, anyone making the effort to visit ‘Baan Kwan Chang’ in Klong Son valley will be rewarded by seeing the elephants in a more natural surroundings.   Here the camp is in the jungle and surrounded by fruit farms and jungle clad hillsides, there is very little development of any kind – in contrast with the more built up roadside area in Klong Prao.

Likewise ‘Kai Bae Meechai Camp’, located the entrance to Kai Bae Hut Resort has a couple of young elephants that they often bring down to the sea to play in the ocean.

The treks at these camps take you inland,  along river beds and up into the hills away from the main road.

If you’re into elephant welfare it’s worth mentioning that one of the camps was raided in 2013 by police from the Natural Resources and Environmental Crime Suppression Division for having illegal young elephants.  ( Story Here )  Always a bit dodgy if a camp has baby elephants that weren’t born there. Don’t believe any of the ‘poor little orphan elephant’ stories you might hear.

And if you are against the abuse of animals then you’ve probably already seen the videos and read stories of how young elephant calves are forced into submission using ‘The crush‘ in order for them to obey their human masters.

So, does that happen on Koh Chang?  No.  And there’s a reason for that.

If you take a wild elephant calf from it’s mother then of course it’s going to want to fight back and will do everything it can to break free and find it’s herd. It would be like trying to train a wolf cub that you found roaming in a forest.

But if you have an elephant born into captivity, to a mother that has lived in captivity for all or most of her life – and who’s been used to human contact since the day it was born, then training it is much easier.  It’s more like training your family’s new puppy than a wolf cub.

Are the elephants mistreated on Koh Chang?

No more so than anywhere else.  They are chained up as it isn’t safe to have large animals wandering around.  And the mahouts will use a metal bullhook, also called an ‘ankus’, to keep the elephant focused on where it is going.  If it is used correctly then it’s the same effect as using a choke chain on a dog, a short quick action to get it’s attention.

Would it be better if the elephants were in the wild?

But that’s not going to happen until everyone stops going to elephant camps. There isn’t a simple solution whereby the animals can all be moved to sanctuaries or rehabilitated into the wild.  That requires a lot of money.  Unfortunately, most of the organizations who shout for releasing elephants from camps fail to offer viable alternatives.

It can be done, as the success of Elephant Nature Park shows.  But requires a lot of resources in terms of land and ongoing financial support to do so.

If you ignore the captive vs. wild argument and just focus on the health of the elephant then you shouldn’t ride elephants as their spines aren’t designed to take a lot of weight.  Sure, they are strong and can pull a car and lift huge logs with their trunks.  But their backs aren’t designed for having weight pushing down on them.

There haven’t been many elephants born on Koh Chang.  But Baan Chang Thai Elephant Camp in Klong Prao had three calves born within the space of 11 days in August 2007. Visiting the camp and playing with the 2-3 week old baby elephants was great fun.   Also very interesting to watch the interaction between a new mother and her offspring.  Some photos that I took below.

Which Elephant Camp to Visit?

Baan Kwan Chang was the first elephant camp on Koh Chang.  The owner could have built it anywhere on the island but instead of locating it close to the main beach areas, he made the conscious decision to locate it away from development, with the idea of bringing the people to the elephants.  Rather than having the elephants live in a busier area.  Access to the camp was originally by a 3km dirt track , although that has now been paved.

In mid-2020 a new owner took over the camp, renamed it and also decided to stop offering elephant trekking tours.  Which is a big step for any camp to take as income is almost entirely from offering elephant treks.   ** 2021 UPDATE – Unfortunately, elephant treks are again being offered at this camp.  I’m not exactly sure why.  Having said that it’s still the best elephant camp on the island. **

The elephants don’t roam freely as they would in the huge parks in the north of Thailand.  But they no longer have to give rides to tourists.  Instead visitors can visit and learn more about the mahouts way of life, how elephants are cared for etc.  Plus feed them and swim with them in the river.

Check out the Klong Son Elephant Camp Facebook page for more videos of the elephants and mahout life.  At present most content is in Thai language.  This is because there aren’t any foreign tourists due to coronavirus, so the aim is to show  and educate Thai people how the elephants are cared for in captivity on Koh Chang.

Children under around 12 years old (or if they are just very short)  are half price.  These prices include transport to/from your hotel, drinking water, fruit for you and the elephant.

Book through your hotel or any tour agent or just turn up at the camp.   However, in high season, if you haven’t booked in advance you may have to wait for a ride. But remember that most hotels   / agents will only deal with one of the camps and so if you want to visit a specific camp, you’ll need to shop around.

Hiring a Catamaran or Yacht on Koh Chang Sailing around Koh Chang is increasingly popular.  Every year there’s a noticeable increase in the number of yachts visiting the island and I often...read more...